Detlef Göke, operator of the mobile home ground at the marina, has already welcomed many unusual guests. One couple already stands out because of their vehicle - it is anything but a normal motorhome.

Diana and Tobias have taken over an old Unimog, which has been converted into a motorhome, and want to go on a trip into the wilderness with it. The two Cologne have made on the transfer of the vehicle from the old owners in Lower Saxony stop in Bergkamen RV port with Detlef Göke © Stefan Milk 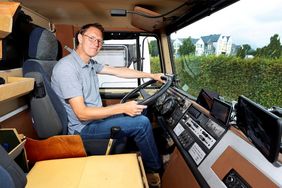 Driving the six-cylinder diesel is not that easy. It has eight gears and can get through almost anywhere with its all-wheel drive. © Stefan Milk 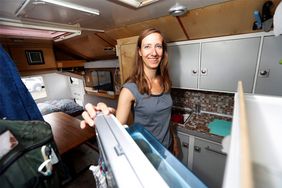 Diana inside the Unimog: it is fully equipped with a sleeping and dining area, kitchen, refrigerator and washing facilities. Before it goes on a long trip, the Cologne resident wants to make a few changes. © Stefan Milk

Detlef Göke, the operator and supervisor of the motorhome ground at the marina, has already welcomed guests from all over the world: Scandinavians on their way south, Spaniards who want to take a look at northern Europe. This morning he talks briefly with Michael Döbbel from Norderstedt near Hamburg at the exit.

Döbbel was in the camper port for one night. He is on the way to Disneyland in Paris with the whole family. The entire route in one piece was too far for him and so he made the stopover before continuing on his way.

It's very similar for Tobias and Diana (both 45) from Cologne, at least as far as the stopover is concerned. But the teacher couple stands out immediately, because they are traveling in such an unusual vehicle that they immediately stand out among the motorhomes.

The vehicle of the two Cologne already towers over the other campers around some, not only because it has clearly more ground clearance than a normal camper. It is a Mercedes Unimog built in 1986, painted in sandy yellow and theoretically equipped to cross the Sahara without damage.

The two Cologne residents are planning something similar. They bought the Unimog to set off into the wilderness, they say with a laugh. The couple bought the Unimog only two days ago in Osnabrück and now have to get used to the vehicle. The Unimog, which is equipped with a six-liter diesel engine (130 hp), has eight gears. You don't have to start in the first gear, but in the fourth. "At 30 km/h, you already have to shift into eighth gear," reports the new owner. The first three gears are only needed when going off-road.

Theoretically, the Unimog could even handle sand dunes. For safety's sake, however, long perforated plates are bolted to the side walls, which can be pushed under the tires if the huge vehicle does get stuck somewhere.

In an emergency, however, it could probably extricate itself from almost any predicament: A winch is installed at the front of the radiator, which can also be used to pull tree trunks to the side if they are in the way.

The Unimog does consume an enormous amount of diesel - about 20 liters per 100 kilometers. But otherwise it is completely self-sufficient in terms of energy, Tobias proudly reports: There is even a solar system on the roof to heat the water and supply electricity.

Inside the superstructure, the Unimog is equipped with everything that is necessary for life even far away from any civilization: It has a small kitchen, a bathroom and, of course, places to eat and sleep. On the roof there is not only a water tank, to which the outdoor shower can be connected, but also another, which can be used as a washing machine by rocking while driving. It is also suitable as a roof terrace.

The new owners have already had a chance to get used to sleeping in the motorhome: they bought the Unimog from an elderly couple in Osnabrück, who had previously driven the vehicle mainly crisscrossing Scandinavia. After the purchase, the new owners stayed in Osnabrück for two more days to be shown around and get familiarized with everything. "The previous owner did almost everything himself," Tobias reports - including a large part of the conversion to a motor home.

It's not too far from Osnabrück to Cologne, but the two teachers were keen to spend another night in the Unimog and then drive home at their leisure. As soon as they can, they want to go on a long drive. There they will probably spend a not so comfortable time more often as at Detlef Göke's place at Marina Rünthe.