Detlef Göke plans book about his experiences in the RV campsite

Half of Europe makes a stopover at the RV campsite at the marina - also because of its location close to the Kamen interchange. Operator Detlef Göke wants to publish his experiences as a book.

Detlef Göke is working on a book about his experiences with the RV port in Rünthe. The Werner writer and publisher Magnus See will write it down.

Detlef Göke has experienced many bizarre stories at the mobile home campground he runs. 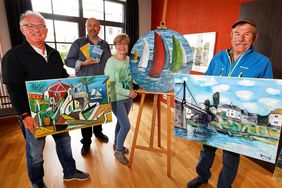 Detlef Göke (l.) and Magnus See (2nd from left) work together more often - for example at an exhibition of the artists Maria Demandt and Theo Elberfeld in the wedding room.

Detlef Göke from Bergkamen doesn't have to leave his hometown to meet half the world - because it meets at his place. Göke is the operator of the RV campsite at the Marina Rünthe. In the years that he has been looking after the site, motorhome owners from all over Europe and other parts of the world have spent the night at Rünthe harbor. The operator, who maintains contact with every guest, has experienced so much that he now wants to make a book out of it.

However, the man from Bergkamen does not want to write it himself because he has no experience with it. He has already found a kind of "ghostwriter" for it: the author Magnus See from Werne, who has already demonstrated an eye for bizarre types and bizarre observations in his first book "Wege in die spontane Erfolglosigkeit" ("Paths to Spontaneous Unsuccessfulness") - and who has already published crime novels.

Göke's experiences are also sure to make exciting reading. The operator of the RV campsite, for example, remembers two siblings who both live in towns in Westmünsterland that are not too far apart. Nevertheless, they hadn't seen each other for years - until they ran into each other again at the Bergkamen RV campsite. By chance, both had spent the night there with their motorhome.

The RV campsite at Marina Rünthe was also once the subject of a conversation in Alaska, as Göke learned. There, two couples from Hamm and Paderborn met by chance, both of whom had stayed overnight at the marina before.

Göke himself has also already benefited from the acquaintances through the RV campsite. Among the campers was also one who went to sea on a speedboat. When Detlef Göke was on vacation where the speedboat is located, he took part in a tour. "I immediately knew my way around the boat, that's how precisely I got everything described," he reports.

It is possible that other stories from the marina will also flow into the book. The operator of the mobile home campsite knows his way around the marina better than anyone else - so well, in fact, that he even offers occasional tours of the marina as a tour guide.

By the way, he is also committed to revitalizing the marina, among other things through events and exhibitions in the wedding room. Here, too, he works together with Magnus See.