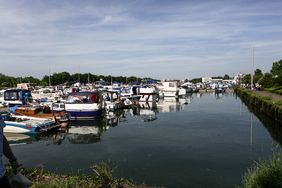 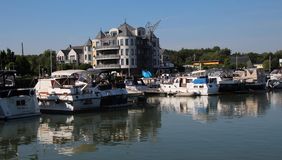 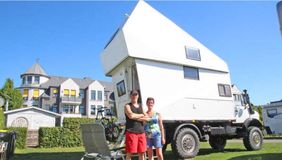 At first glance, the Marina Rünthe is characterized by vacancies, but it is far from being uninhabited. The existing offers are actively used. Detlef Göke, the operator of the camper site, is not the only one who is satisfied with the past year; harbor master Thorsten Nustede could also expand to meet the demand.

Rünthe - "The port is without question a destination for excursions," says Thorsten Nustede. "There are always plenty of pedestrians and cyclists here. So it is definitely busy," Nustede dismisses a dying of the marina far. And anyone who visits the remaining gastronomy with Restaurant California or Hafencafé can confirm this. However, Nustede admits: Young people are not to be found in the marina. "The youngest who come are 40, 45 years old. It's the older clientele that comes. But the youth can't afford the offerings here either."

However, Nustede is not only satisfied with the number of visitors on land, but also with the lively interest in the marina on the water, with up to 40 guest berth holders at peak times. "Many then stay here for four to six weeks and head from here to Henrichenburg, Centro Oberhausen or even Preußenhafen." Not to be forgotten are the people living in the region who use the marina as their home port. Indeed, the marina's permanent mooring area is full. "Unfortunately," says harbor master Thorsten Nustede. Theoretically, there could be more.

"I have an incredible demand for large berths," says the harbormaster. "But I can't meet that demand. My whole jetty, 200 meters long, is full - and I can't expand anymore." That's what Nustede regrets most. "The marina is simply maxed out."
Campers enjoy the maritime flair

But the many boats in the harbor don't just attract boating enthusiasts - camper enthusiasts also enjoy the maritime flair of the harbor. "I have a new record year," Detlef Göke is pleased to report that he was once again able to top the peak visitor numbers in 2019. "Per year, there are always about 100 cars more that stop here." One reason for the increase this year could be a professionally created video on the website womoclick.de, which presents the camper site - and in which Göke also points out the offers of Liquid Liberty and the harbor café. "We have to stick together here, after all," says Göke, who can also offer his customers WLAN and toilets.

The number of regular customers, that the master of 18 pitches for motorhomes accomodates, is growing. But there are also real exotics. Visitors from Australia and New Zealand came in 2019, or a group that drove on the Football Route from stadium to stadium and started from the marina to both the former Westfalen Stadium and the arena on Schalke.

Overall, Detlef Göke says he is lucky with his guests. "Ninety-five percent are normal, good citizens." The other five percent, he says, are bill dodgers, disregarding instructions, leading as they please and repeatedly moving the vehicle. "Unfortunately, those are the ones you notice," says Göke, who runs the camper site as a sideline. "When I'm at work, I don't pick up on a lot of things." That's why he makes his daily rounds at different times, so that word doesn't get out about his "patrols."

Mostly, though, the guests are nice, and Göke, who lives just across the street, enjoys chatting with motorhome owners about their vehicles and their travel plans. "Where people come from, I usually don't even know. I'm always interested in where else they want to go," Göke admits with a laugh. And even if the time spent on site is officially limited to three days, Detlef Göke sometimes turns a blind eye. Because while the apartment at home is being renovated, some people use the marina as an alternative accommodation.

Marina Rünthe is to be revived after long preiords of vacancy

New start for popular excursion destination: These are the plans for Marina Rünthe