"We're just at home," says Beate Röllecke, pointing to her mobile home in the Marina Rünthe. She and her husband have been living on wheels for a year and a half. 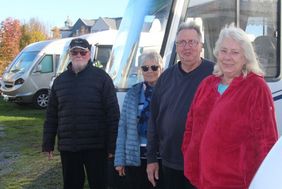 Günther (2nd from right) and Beate Röllecke (right) have broken down all their permanent tents and have been living in their mobile home for one and a half years - here with their pitch neighbours Monika and Klaus Schlüter. © Stephanie Tatenhorst 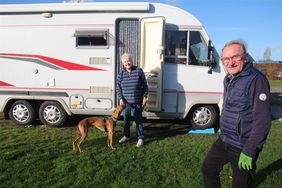 Ingeborg Lauter-Zelt and Rüdiger Zelt stopped at Marina Rünthe by chance and are thrilled. They will come again and recommend the place. However, they cannot imagine a general life on four wheels. © Stephanie Tatenhorst 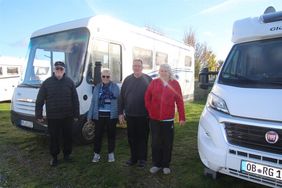 Günter and Beate Röllecke's mobile home has become their permanent home. It is not yet clear when they will pull up stakes in the marina. But in any case, they will soon be heading for the warmer south. © Stephanie Tatenhorst

Living reduced to the least in the smallest of spaces is the current lifestyle trend of Tiny Houses. Beate and Günther Röllecke live similarly: they have moved into a mobile home.

"It works out wonderfully," says Beate Röllecke with a laugh, "we just stay at home." Because their own four walls move with them, no matter where they go. Only the front garden changes from time to time. The couple has now been at Marina Rünthe in Bergkamen for two months.

The camper van site in the marina is very familiar to the couple, who originally come from Oberhausen, because Beate's daughter lives in Rünthe. "That is also my registration address. That's where all the mail goes," the 61-year-old explains. And the daughter then sends important things afterwards.

Günter Röllecke also still has a registered permanent address, but abroad. "My son-in-law owns a house in Ireland and my pension goes there," explains the 66-year-old. Even the telephone therefore has an Irish area code. Ireland was therefore also the country where the Rölleckes first went when they gave up their flat in Oberhausen.

"We put our furniture in storage and could set up another flat if something should ever come up. But otherwise we parted with everything," Beate explains. The first thing the 61-year-old remembers is "what felt like 20,000 pairs of shoes". Then comes clothing. "We gave everything away to others," the couple explains. "And actually we still have too much," Beate says.

Cost of living is much cheaper on the move

"You can buy food much cheaper in the markets abroad than here in the supermarkets," Günter has noticed. And the monthly rent for the flat was more expensive than the parking space fees the couple now has to pay.

From Ireland, they then went to Portugal. "To where it's warm," Günter says with a laugh. So they are still holding out in Germany, but Spain beckons more and more every day. It is above all the cost of living there that makes their current life much cheaper than before.

"We also have a solar system on the roof and a battery for charging in the car, which is ideal," says Günter Röllecke. And if the sun doesn't shine for a while, they can use the electricity infrastructure of the site they are on as needed and then pay according to consumption.

In addition, the motorhome has two gas bottles that can be filled at petrol stations everywhere. Abroad, that would sometimes be difficult with the connections, but so far a solution has always been found.
The Rölleckes are not yet sure when they will move on. "We like it here very much. The forest is close, the harbour is great and the restaurants offer variety. We have everything we need here, and groundsman Detlef Göke is just super and always helpful."

This is also confirmed by the current campsite neighbours. Monika and Klaus Schlüter stopped at the marina on their way through and listened eagerly to the Rölleckes' descriptions of their new life. "It would be nothing for us," they both agree. "We have a large circle of friends and acquaintances, so I would miss them," admits Monika Schlüter. But they don't mind living in such a small space.

The next but two campers, Ingeborg Lauter-Zelt and Rüdiger Zelt, could only imagine a permanent camper life if their motorhome was a luxury-class vehicle. "It does need some comfort," says Rüdiger Zelt. But the Rölleckes have no regrets and would do it again and again. Because the best thing is: "If we don't like the neighbours, we just drive."