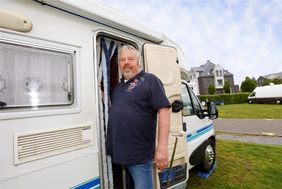 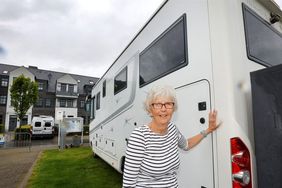 For most camper owners, the parking lot at the marina has been off-limits in recent months. That is now changing. Operator Detlef Göke is prepared for the crowds of people wanting to travel.

After Pentecost, Detlef Göke can finally remove the yellow sign at the entrance to the camper site at the marina. It only allows access to people who travel for work or live permanently in a mobile home.

People like Michael Hochmahl, for example, who has been in Rünthe with his mobile home for three quarters of a year. Or Renate Buchheim, who has also been there for two months. The two actually use their individual vehicles as permanent residences, so Göke is legally allowed to accommodate them. Both are full of praise for the operator of the camper site: "He even regularly drives me to the laundromat in Lünen so I can do my laundry," says Hochmahl.

Corona tests at the camper site

"Normal" caravan travelers will probably have to do without this service. For them the place was taboo in the past months because of the pandemic restrictions. From Tuesday on, they are allowed to come again.

And the rush will be great, knows Göke. His phone hardly stands still. "Even on Friday night at 11:30 p.m., someone called," he says. "I didn't answer it then, though."

Anyone who wants to park their camper at the marina needs a negative Corona test. Göke is prepared for that. He has made an arrangement with the tenants of the guesthouse at the ecological station in Heil, who run a rapid test center there: "They come to the RV port on Tuesday and Thursday evenings. Saturdays, too, if needed."

Göke has used the Corona break to update the site. For example, he has installed a new ticket machine where campers can also pay by card and by mobile phone app. One night costs ten euros.

A sign warns when the camper site is full

18 spaces are available to motorhomers. Initially, however, Göke does not want to occupy all of them so that his guests can keep their distance. He is also prepared for the fact that in the euphoria of the reopening too many vehicles might come: Then he wants to put up an " occupied " sign at the harbor way. Because otherwise traffic chaos will break out in the marina.

After the places are allowed to open regularly again, Michael Hochmahl wants to give up his permanent accommodation in Rünthe. After all, he lives in a camper van in order to travel in it: "We want to go to Usedom," he says. And by fall at the latest, he'll be heading south to Spain.